#beforeiwasboss: A couple that runs a cafe together, stays together

Hidden in a corner of Everton Park amidst the bustle and commotion of Singapore’s busy town is a quaint little cafe, isolated from the noise and blanketed by a quiet, gentle calm. Run by super-couple, Jon and Hwee Ying, ‘The Better Half’ is a bakery and coffeeshop, all rolled into one immensely aesthetic and uniquely delicious package.

But before opening up their dream shop, both Jon and Hwee Ying worked as F&B staff at different outlets and cafes, eventually crossing paths and subsequently, business ideas. I caught Jon and Hweeying in action at their newly opened cafe to find out more about their journey to becoming F&B bosses. 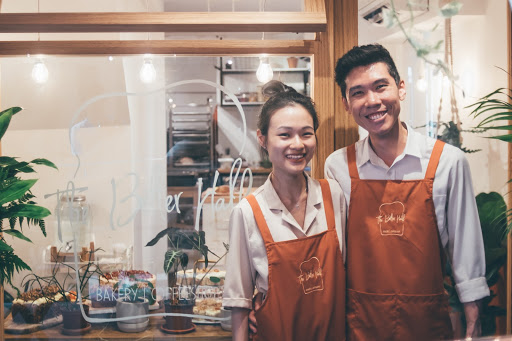 Hweeying and Jon, the masterminds behind The Better Half

Looking at how precisely Jon places each pomegranate seed on top of his Pistachio Lemon Tea cakes, it’s clear that the baker half of the dynamic duo takes pride in his craft. Having never baked before joining the Culinary & Catering Management course in Temasek Polytechnic, Jon, now 26, leaned towards hot cooking in his early exposure to the culinary arts. But once he got a taste of the science-like precision behind baking, he knew he had found his calling.

“I love how versatile it is. You can take any flavor and turn it into a cake or dessert,” Jon remarks on his love for baking. 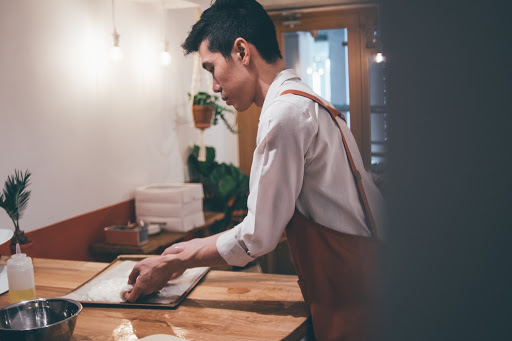 As Jon takes me through his path to becoming a baker, Hweeying listens quietly while shuffling about the small kitchen as they prepare to close for the day. With the way that Hweeying expertly operates the complicated coffee-making machinery, it was a surprise to find out that she started making coffee just 2 years ago.

Entering the F&B industry as a service crew member in a cafe, the now 24-year-old Hweeying, had to learn on the job and eventually tried her hand at making coffee. She grew to enjoy baristaring, quoting the precise and curated process of coffee-making as characteristics that drew her to the job. As a learning service crew member, she picked up many skills relevant to making coffee and reckons that anyone can do it if they are determined and committed to their craft.

“Changing the yield or the grind by a single gram would make a whole lot of difference in the output and how the coffee tastes,” Hweeying comments on the precision in coffee. 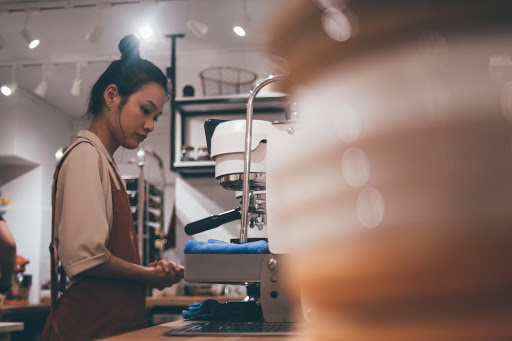 Both Hweeying and Jon worked part-time in different cafes before fate allowed their paths to cross and brought them to work at the same cafe - something our taste buds are surely thankful for.

Cooking up a business plan together

Falling in love with each other and with the idea of running their very own business, the ambitious pair decided to sell their own cakes via Instagram. Their home-based business grew along with their customer base and soon, they were running out of fridge storage space and could not cope with the increasing demand for their pastries. 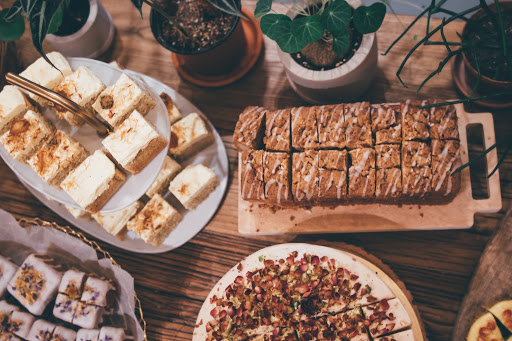 “It was always what we wanted, to start our own cafe. Most bakers and baristas that I know have a dream of starting their own business,” Jon explains while putting the finishing touches on his cakes, “we just felt that it was time to take the leap.”

In January 2018, they decided to commit 100% of their time into making ‘The Better Half’ a reality. Finance was the key - they knew that in order to get a space, upgrade their equipment, as well as decorate their cafe, they needed capital. Saving up for almost 2 years, Jon and Hweeying worked relentlessly on gaining the funds to kickstart their cafe-owning careers, eventually seeing their efforts pay off when their cafe finally opened.

A day in the life of a cafe boss

The Better Half gives off the vibe of a lazy afternoon, where the world is all rainbows and butterflies and there isn’t a care in the world. But I assure you, the life of a cafe owner is tough - just ask Jon and Hweeying. 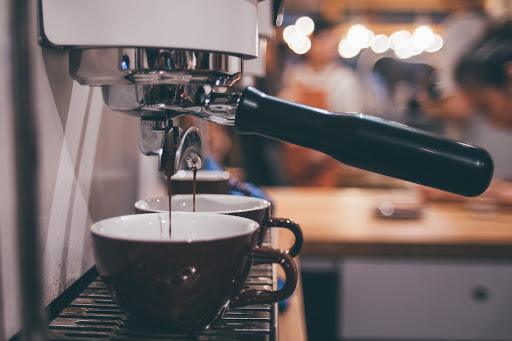 The never-ending drip of hard work and attention to detail

“Sleep!” Jon and Hweeying answer almost simultaneously when asked about the sacrifices they’ve made to keep the business running.

Going to bed at midnight and starting their morning at 5am, their schedules are packed to the brim with administrative duties such as invoicing, upkeeping their website as well as updating their cafe social media pages. With only two people behind the entire operation, it’s not hard to see why Jon and Hweeying are getting so little sleep. 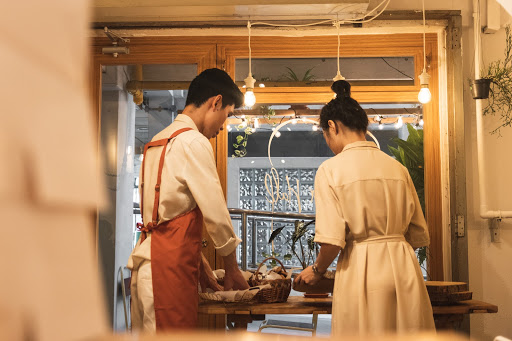 Despite the daily struggles of being their own boss, Jon and Hweeying have never been happier, facing their trials head-on and as a team. Their high standard of cakes and coffee set the bar for their expectations of the cafe - expectations that every boss would have of their business.

“It’s very different, working for someone and working for yourself,” says Hweeying, “you want it to be perfect.”

Jon adds on to highlight the stark contrast: “Everything matters so much more to you, so you’re willing to put in more hours without feeling disgruntled.”

Transitioning from employee to boss can feel quite sudden, and unlike an employee, the boss has to start caring about everything. The change can be shocking, and there won’t be much time to adjust, but as Jon and Hweeying put it - if you never try, you’ll never know.

A word of advice

As former employees of F&B businesses ranging from cafes to bakeries, Jon and Hweeying have experience being on the ground level, engaging with customers and preparing their orders. The couple believes that their previous jobs as F&B staff have helped them understand how a business runs from the ground up and has taught them “everything they know” about running a cafe.

“I think some business owners fail because they never got to experience working in a cafe first hand,” the pair explains, finishing each other’s sentences, “even though we’ve been in F&B for so long, some things still catch us by surprise.” 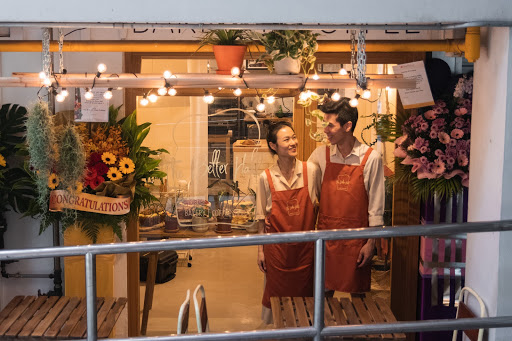 Proud owners of their cafe

Jon adds on some words of encouragement: “We’ve been grinding for almost 2 years and saving up to get our cafe started, but it’s been worth every minute and every cent. If you never try, you’ll never know how much you love it or how well your business will do.”

A viable way to put bread on the table, joining the F&B industry is a good way to learn the ropes of how a business operates and build up an understanding of the complex industry. Before going all-in into a business plan, start small by joining a cafe as a service crew member to experience what it’s like being on the ground and interacting with customers.

The fuel that drives them

Despite the rigor and hardship of being your own boss, Jon and Hweeying are able to find “little milestones” that keep them churning and working even harder to achieve greater things. Being together all the time is a major perk of going into business with your significant other, says Hweeying, and it also allows for smoother working processes due to the enriched understanding that you will have of your partner. 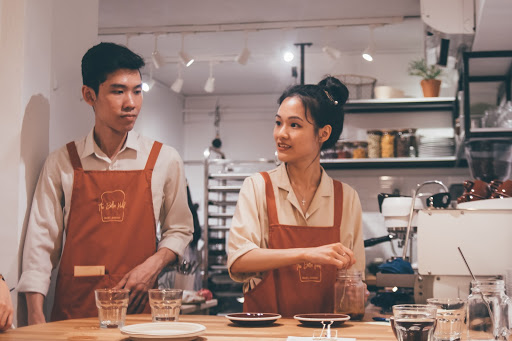 “You learn to compromise and you won’t be harsh on your partner if they make a mistake,” Hweeying elaborates.

Apart from spending time with one another, the pair celebrate little achievements between themselves that ultimately drive them to their ambitions. Occasions like getting 500 followers on Instagram, or seeing their long-time customers coming down to their cafe may seem small in hindsight, but in the moment, these are the milestones that keep Jon and Hweeying going.

When they’re not baking up a storm or brewing the perfect beverage, Jon and Hweeying take up hobbies that allow them to relax and get away from the bustle of managing their cafe. Jon, an avid football fan and, to my dismay, a Liverpool supporter, enjoys keeping up with the latest football scores in his spare time. Hweeying, a talented artist, does oil-paintings amongst other artforms in her leisure time and even painted the walls in the cafe. 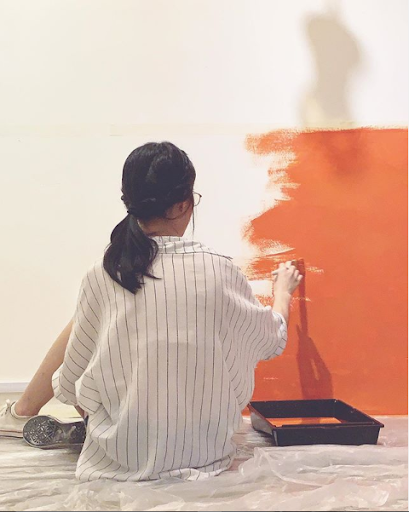 Putting her art skills to the test

Perhaps you have a dream of starting your own fashion line or a dream of running your very own ice-cream shop. Maybe you have the ambition of turning your passion into a sustainable full-time job or an idea so unique and special that you’re sure it’s going to sell. Whatever your plan is, it’s important to gain experience. Whether it’s F&B or Retail, start your journey now by looking for full time, part-time & contract jobs on FastJobs.

Just like Jon and Hweeying, you could take that experience and knowledge, turn it into a full-time job, and eventually, become your own boss.

All photos courtesy of The Better Half